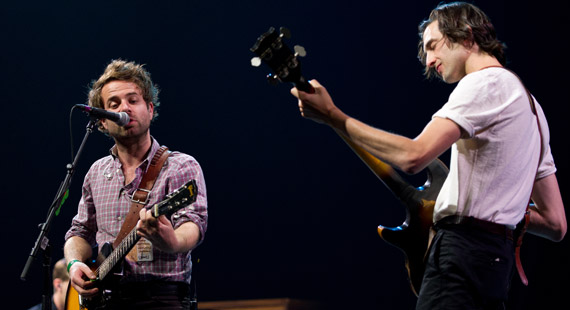 Since the Coalition Government in the UK came to power in 2010 there has been a concerted effort by politicians to put housing back at the top of the list of national priorities amid worries that a housing ‘superbubble’ may be happening in London and the South East of England.

The change in the law that has coincided with the government’s plans to spark another wave of house building came into effect on the 30th of May last year. Since then the Music Venue Trust (a Non Profit that represents the interests of the live music sector) knows of 7 premises that are under threat from the legislation which allows local residents (and more importantly) new and encouraged local developments to make complaints about established music venues with impunity.

As a result the Trust are now campaigning for an urgent review of Noise Abatement Legislation to ensure that a fair balance is met between the concerns of local residents, developers and the local business owners and music fans who frequent various live music hotspots up and down the country.

“The campaign we’re running at the moment is one specifically aimed at the noise legislation, and that’s for two reasons” says Mark Davyd, CEO of the Music Venue Trust. “Number one is it’s a series of laws, there’s not actually one specific law we’re going up against. The series of laws – all of which are quite good in themselves – are great but unfortunately when you put them together you can start to see where the loopholes are. Specifically on noise abatement, the loophole that’s emerged there has come about through changes to the planning laws which encourage the building of flats and apartments in town centres. Now that seems like a good idea.”

“Specifically, the Clean Air Act 2005 and the Environmental Protection Act 1990 — both of those seem pretty good but when you put them together with some stuff that was done in 2013 about local authorities listening to local residents’ and their noise complaints, you realise you can build a flat right next door to a music venue and have it shut down. Which is plainly against common sense.”

“And so our complaint isn’t necessarily that anybody has made a mistake with any of these laws, it’s just the accumulative effect of those laws needs to be reviewed and we need to be saying ‘Well, what about people and their right to a music venue?’”

“Are we seriously going to close down all the music venues in the UK because somebody wants to build a block of flats next to them?”

“Secondly, I think we also have to be quite honest in saying ‘some of this looks like intentional abuse of some of these acts’. That’s the other thing we’re really trying to bring to the attention of the Secretary Of State for The Environment. We have people who are looking at property values and realising that the presence of a local music venue depresses property prices because they’re loud and noisy places to live by. It becomes a bargain if you can move in, shut down your local venue, remove the noise and then inflate the value of your property.”

“The local authorities largely aren’t to blame though.”

“The Fleece in Bristol is threatened by development, so is The Vault in Rugby, The Picture House in Edinburgh went because of noise, there’s a venue in Brighton at risk too. There is a particular responsibility for music venues to act and behave like good neighbours. And I think the Music Venue Trust should support people who say ‘please can our music venue behave responsibly’”

“But people who are saying, ‘Hey, I wanna live wherever I want to live and I want to change the environment so it’s suitable for me’, need to think differently in our opinion. The law shouldn’t really be supporting people who are buying up properties that aren’t really suitable for people to live in and then shutting down the problem, which in this case is music.”

“This wasn’t happening five years ago. Since the change in the law we know of at least 7 venues that are under threat from noise abatement legislation. Lots of people who have chosen to live in vibrant parts of the UK’s towns are quite happy to live near a music venue, they have often made that choice knowing full well that there is a venue in the area. Why should that venue be shut down just because of a new development?”

“We’re the first venue to fall foul of that rule,” says Chris Sharp from The Fleece in Bristol, one of the venues under threat from a new development being built “20 metres from the stage”. “Within three months of the laws we had a notice issued to us saying the offices next door were due to be turned into residential flats”

“The change in the planning laws has opened the doors for anyone with an office block to turn those into flats, and since most office blocks are in town and city centres they are also close to music venues.”

“The Government made an electoral promise to build a certain number of houses and their way of trying to meet an almost impossible target is to put through legislation like this. It will create a lot of housing but it will also create a lot of problems too.”

“I had a meeting with Kerry McCarthy, a Bristol Labour MP, and she said it was ‘rushed through’ and not ‘thought through’ and as a result there’s this huge loophole and people are suffering.”

ConcertTour.org reached out to The Noise Abatement Society, an NGO that promotes ways to combat antisocial noise, for comment on the issue.

“With the Music Venue Trust there are ways in which we have common interest on this issue and we see no reason why venues and residents cannot co exist together,” says Lisa Lavia, the organisation’s Managing Director.

“Apart from noise which is a danger to human hearing, anything else is open to interpretation based on the context in which that sound takes place. That’s the beauty of the UK Noise legislation, it’s very very flexible.”

“The noise legislation can allow that venue’s event to take place. The problem is the specification of the new builds is not sufficiently high enough for residents to not feel like they’re living next to the stage. And that’s completely solvable by having the council require a higher specification for the building so those people aren’t continually exposed to a noise source. Whatever that might be.”