The rains had passed over Enterprise, Alabama on Friday and it was time to truly kick off the music of the BamaJam Music Festival. The afternoon saw performances by up-and-coming NEEDTOBREATHE, ‘Idol’ beefcake Casey James, as well as country icon Alan Jackson, but the headlining spot was reserved for the Atlanta-boys who have taken country music by storm — the Zac Brown Band.

The namesake of the Zac Brown Band got to warm up his vocal chords when he was called onstage during Alan Jackson’s set to serve up a few tasty treats for the audience. The country heavyweights collaborated on the Grammy-winning “As She’s Walking Away” for Brown’s album You Get What You Give and Brown kindly returned the favor by teaming up for “Dixie Highway” on Jackson’s latest effort Thirty Miles West. It is cool how the country music fraternity draws together to help one another out and its especially interesting to see these cross-generational artists introducing their fan bases to the next big thing or showing the younger fans where their favorite music was born.

After the duo of songs, Brown exited stage right, leaving Jackson to dole out the hits to the feverous crowd. It wasn’t long before Zac Brown and his band of cohorts got the stage all to themselves, and they certainly made the most of it. They kicked off the set with the hit single off their latest album, “Keep Me In Mind.” The first thing you noticed was the band’s great energy onstage. They played off the musical talents of each other to weave together a great sound.

It wasn’t long before Zac Brown was sending us down to the Florida Keys to waste the day away with the Jimmy Buffett collaboration “Knee Deep.” He continued to reinforce that he just might be the second coming of Buffett when playing his smash hit “Toes.” When he changed up the final chorus to “I’ve got my ass in lawn chair/toes in the clay/not a worry in the world/a PBR on the way” it was as if he was singing directly to the BamaJam crowd who were living every word.

They certainly didn’t neglect their hits. They’ve had eight songs rise up to number one on the charts and a couple that rang in at two. Beyond “Toes,” “Knee Deep” and “Keep Me In Mind,” they played a touching “Free” that had the couples dancing beside the lawn chairs. They also made the crowd explode when they wrapped the evening with the song that has become synonymous with Zac Brown, “Chicken Fried.”

The setlist wasn’t all their own. They pulled out the raucous southern rock anthem Aerosmith’s “Sweet Emotion,” and showcased the mad fiddle skills of Jimmy Demartini with the Stone Mountain Laser Show favorite “Devil Came Down to Georgia.” Come on guys. You couldn’t have thrown in a little Ryan Adams’ “Oh My Sweet Carolina” for a nice dial it back moment?

The Zac Brown Band is one of the brightest stars in country music today. They ripped into this fun Friday night headlining gig with energy and passion. They did get a bit self-indulgent at times with long solos by Clay Cook and drummer Chris Fryar to cap off “Free,” but it thankfully didn’t detract from the set. In all, Zac Brown Band wowed the crowd with one of the highlights of the weekend. When you take in their live set, it’s not hard to see why they are country’s newest favorite ensemble. Be sure to check out their new album Uncaged that will get released to stores and digital outlets on July 10.

For our daily public service announcement, be sure to checkout Camp Southern Ground, Zac Brown Band’s camp for special needs children in Fayetteville, Georgia. The boys are giving back, so help them support this worthy cause. 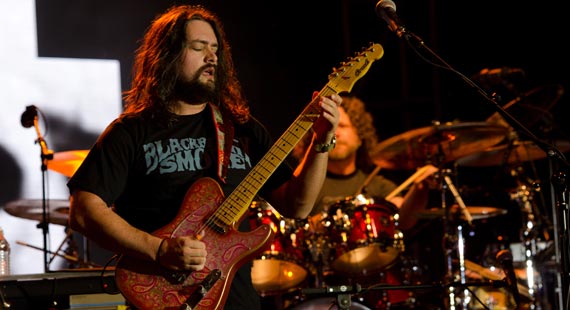