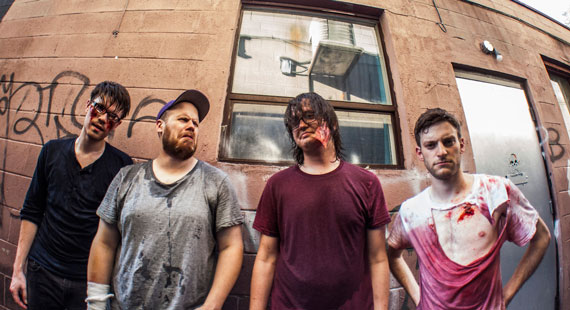 PUP are an example of that rare breed of band for whom noise pollution and permanent ear damage are of no immediate concern. Hailing from Toronto, who’s scene seems to be throwing around great bands like a petulant child (only with better results), these guys are a prime cut of the region’s particularly endearing brand of “fuck it” rock styley.

With dates in North America and the UK on the way taking them right through from April to July, we caught up with Stefan to find out a little bit more about these candid Canadian incendiaries.

How did you guys get together?
Boring story. Three quarters of PUP were friends since they were little kids. They grew up in the same neighbourhood, went to school together, learned to play music together. I (Stefan) showed up a couple years ago. I used to see them at out shows all the time in Toronto, and one day we decided to hang out in Nestor’s basement and play music together and get drunk and see what happens. So we did those things, and Steve puked and it was awesome, and now we’re a band.

What’s your local scene been like? Are/were there many like-minded groups?
The Toronto scene is amazing. There are so many great bands in this city. It’s a really supportive community – we go to each others shows, wear each others t-shirts, hang out together. And since there are so many awesome bands, it really pushes you to work harder and be better just to keep up with your peers. There’s something really special happening in Toronto right now. Of course we have bands like METZ and Fucked Up who have really put the city on the map, but there are a ton of amazing bands that most of the world hasn’t heard of yet: Pkew Pkew Pkew (gunshots), The Dirty Nil, Greys…. Check those guys out. The stuff coming out of Toronto right now is really incredible.

What’s it like to be touring around the world and have people “give a shit”?
Do people give a shit? I dunno. Either way, it’s been pretty surreal. We had pretty low expectations of what this band would be. I mean, we made a record that we liked, and didn’t really expect much, aside from playing some cool shows in Canada. But to get to tour the world and play with some of our favourite bands is a really incredible experience. We never anticipated this, and it seems to have happened pretty fast (like all in the past 4 months or so). We’re just trying to enjoy it while it lasts. Hopefully people keep coming out to shows and getting rowdy and we get to keep doing this for a long time.

You’ve opened for Billy Talent, Fucked Up and some other pretty cool acts with a fair following. How does that happen?
Ya, it’s been pretty crazy opening for bands like that – bands we’ve all been into for a long time. I guess the Canadian music community is pretty small. We put out the record in Canada last October and it did fairly well over here. A big part of that is because bigger Canadian bands have really helped to champion us – like Billy Talent, Fucked Up, Cancer Bats, Hollerado. It’s cool to know that these bands that we’ve looked up to forever are into our record.

How lively do your live shows get? Are there any good stories?
They’ve been getting pretty crazy lately… There have been a few shows in small rooms where it gets a bit nuts and one of us gets kicked in the face by crowd surfers or whatever. Those shows are my favourite. One of my best show memories is actually playing in Southampton at Joiners. It was our first time in the UK, and the record wasn’t out yet, so not a ton of people were there – maybe 30 or 40. But they were all so into it. While we were playing, I was running around, jumping off shit, and the crowd wanted to reciprocate so they all formed a human pyramid and the guy at the top was high-fiving us while we were playing and stuff. That was a moment where it was like “man, we’re halfway around the world right now, and these 40 kids are super into what we are doing. This fucking rules”.

How does the live experience differ around the world? Or is it all pretty standard?
Nah it’s pretty different. I mean there are spots in Canada and America where we have a really strong following and shows get super rowdy. And then, there are some places that are super conservative. Like last time we were in Europe, we noticed that Danish audiences are really reserved. Everyone who came out to the shows were really into it, but they didn’t like to push each other around or sing along, which is what happens in most places. We really had to work hard to get the crowd going, but sometimes that sorta challenge is nice and keeps you on your toes.

Why be a band and make a Punk record? Why not be a Metal band or an Indie Rock band? What is it about Punk for you?
We all love punk music a lot – it’s what we grew up listening to – but we never intended on starting a punk band or making a punk record. It just sorta happened. In fact, I don’t really even know if it is a punk record. I guess it is, kinda, in the sense that it’s loud and aggressive. When we started writing music together, we weren’t concerned about a sound or genre or anything, we just wanted to write good songs. And after a while, I think the fact that we all love heavy, gritty music started to shine through. The other thing was, I think our sound was actually shaped a lot by the kind of live band we wanted to be. Since day one, our live shows have been a sort of catharsis for us. We get all this pent up energy and aggression out on stage, and we wanted to write music that was conducive to that sort of show. It’s more fun that way.

NME have given you an 8/10 for your record and you’re starting your UK tour with one of their shows. What’s it like to have such a strong foundation with a foreign music press so relatively early in your career?
It’s crazy. We’re really excited and humbled by the reaction we’ve gotten at press. We really didn’t expect it. It’s awesome to be able to see the world in this way, and every day I wake up and I feel lucky. I know there are a million people in the world who would give their left nut to do what we’re doing, and we’re just thankful that we’ve been given this opportunity.

What are your plans for the band and the sound?
The plans for the band are to tour like crazy for the next year. We’ve made it our goal to play 200 shows in 2014, and we’re going to make it happen. As for the sound, I think it’s been evolving. We’ve started writing our second record. It sounds like PUP, but I think maybe a bit heavier. It’s so hard to say at this early stage. We’re just going to keep doing what we’re doing and hopefully people like it. And if not, oh well. Back to working at Burger King.