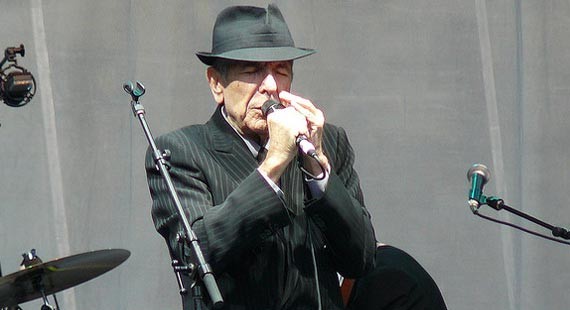 “All I’ve got to put in a song is my own experience,” folk music legend Leonard Cohen told The Guardian in January 2012, the month his album Old Ideas was released. Old Ideas was a striking album that encouraged all types of listeners, young and old, to dig into Cohen’s career. Here was a man who, in his late 70s, was still on top of his game lyrically, culling fascinating themes from his treasured mind. Old Ideas sounded like a very spiritual album, both lyrically and musically. It showed the concept of religion as very similar to the process of self-reflection, an endeavor Cohen has used to concoct his image-rich and heartrending lyrics for several decades, since he debuted in 1967 with Songs of Leonard Cohen. Often as artists become older they become more secluded and private, and Cohen has always maintained somewhat of secrecy in his personal life. Interviews are a rare task for him. Still, Old Ideas showed Cohen’s honesty and poetic awe at an advanced age, one that allowed him to self-reflect with as much as emotional power as ever.

On Old Ideas’ second single, “The Darkness”, Cohen taps into a deeply personal feeling that has haunted him for decades. Cohen has suffered from depression for most of his life, as shown on early tracks like “Please Don’t Pass Me By” and “Dress Rehearsal Rag”. The fact that he’s still able to touch on depression unflinchingly into his later years is highly admirable, even serving as therapeutic to others suffering. On “The Darkness”, his lonesome voice creaks out in its typical barrel-aged croon: “I used to love the rainbow, and I used to love the view / Another early morning, I’d pretend that it was you / But I caught the darkness baby, and I got it worse than you.” While perhaps less in depth than some of Cohen’s elaborate tracks “The Darkness” captures sentiments of depression concisely and effectively, with an impact that compares to a sudden punch in the gut. Cohen often sings about topics that aren’t easy to talk about, but that also are inevitable to face at one point in most people’s life.

Speaking about depression, Cohen is blunt about its impact on his life, just as he is in his songs. “I speak of a clinical depression that is the background of your entire life, a background of anguish and anxiety, a sense that nothing goes well, that pleasure is unavailable and all your strategies collapse,” he told The Guardian. “I’m happy to report that, by imperceptible degrees and by the grace of good teachers and good luck, that depression slowly dissolved and has never returned with the same ferocity that prevailed for most of my life.” With this quote in mind, Old Ideas is very much a process of self-reflection, where even though his depression doesn’t rage as fiercely, its memories at the peaks and valleys will always be remembered, both by Cohen and his fans. “I read somewhere that as you grow older certain brain cells die that are associated with anxiety so it doesn’t really matter how much you apply yourself to the disciplines,” he also added, an interesting perspective when combined with the general lyrical direction of Old Ideas.

Depression and love are the two most prevalent lyrical themes in Cohen’s works, though religion and politics also surfaced occasionally. Tracks like “Tower of Song” and “Democracy” touch on the plights of class separation, distancing himself from the government entirely on efforts like “Lover Lover Lover”, a song he left the US to write. Still, all of his topics – from depression to his ambivalence toward certain political attitudes – are kept in check with Cohen’s trademark dark humor and deadpan creakiness. Many elaborate essays can be written on the various themes within Leonard Cohen’s music, and it just goes to show why he is considered by many to be a poet first and foremost, and a musician second.