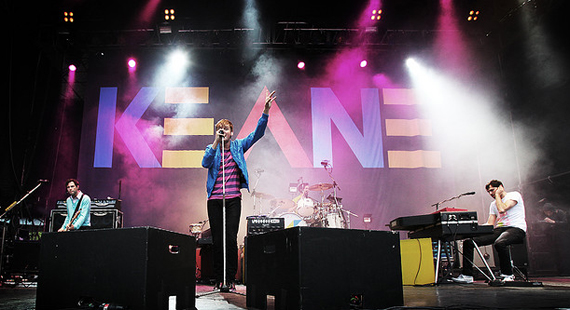 On May 10th this year, it will be exactly ten years since Keane’s Hopes and Fears charted in 19 countries worldwide. An emotionally charged, soft melodic rock record that would start the careers of four Sussex lads who to date have released four studio albums and charted worldwide with gentle anthems like “Crystal Ball”, “Somewhere Only We Know” and “Everybody’s Changing”. The decision they took to record an album entirely without the use of guitar made heads turn too. Here was a band who had slow, vocal centered melodic music like that of Travis or Snow Patrol but had taken out the genre’s defining signature and still remained nominally a rock band. Some people had problems.

Their clean-cut accents and well-bred English air would get them into more trouble though. The arrival on to the scene of four boarding school boys threatened to ignite a wider debate about class that might engulf anyone with a detached house and a double barrel surname. Rock bad boys, The Libertines, were pulled into a debate about their middle class credentials (much to the discredit of their rock n’ roll ones) when Keane’s Tim Rice-Oxley accused them of lying about their so-called “rough background” to score points.

“I think we show more guts and honesty by being ourselves. One in ten bands you meet are probably middle class kids who got into music for the same reasons we did. Some people lie and say they grew up on a rough estate when they didn’t.

“And the white, middle-class media buys it. A band like The Libertines are no rougher in terms of background than we are.

“Me and Tom went out in Japan with Carl and Gary from The Libertines. People who read the music press wouldn’t believe that could be true. But it is. They’re very nice people who weren’t smoking crack.”

While The Libertines might of come off as a bit disingenuous, the consensus seemed to be that one posh rocker had called out another not-so-posh rocker and Rice-Oxley and crew were generally seen to come out of it worse off. Understandable given the context. Keane’s musical style of soft melodic rock – seen to be in the same vein as another ‘posh’ band Coldplay – fueled the thought that The Libs must be the more ‘street’ of the two. They, after all, were smack addicts. Evidence of moral poverty if not actual penniless destitution.

The apparent crowding out of the music industry by well bred soft-rockers is chronicled in Owen Jones’ book Chavs: The Demonisation of the Working Class where he describes a dwindling presence in one of their traditional strongholds: popular music. “It is difficult to name any prominent working-class bands since the heyday of Oasis in the mid 1990s” he writes, “it is middle-class bands like Coldplay or Keane that now rule the roost in music”. That fact that Rice-Oxley and Coldplay frontman Chris Martin had both been fellow students together at the prestigious University College London didn’t help matters.

When The Telegraph met the band during their 2004 American tour in an article titled ‘The unlikely lads’ they described the band as “not obvious rock-god material” but a “polite, unassuming trio from middle-England”, “the sons of doctors and teachers” who “all boarded at Tonbridge School” a successful fee-paying school in the leafy county of Kent. While The Telegraph’s middle-England loyalties painted the guitar-shunning rockers in a sympathetic light, indie-temple Pitchfork unsurprisingly choked on it’s dinner. “For all their elitist pomposity” they wrote, “Keane are just bandwagon-jumpers, without an original thought– or even a trace of charisma– to save their rep. My hope is that they’ll fade unceremoniously into obscurity; my fear is that they’ll breed still more Coldplay knockoffs, eventually saturating Stateside department store P.A.s with all their bloodless sobbing.” What might’ve been an easy listening mainstream album of radio hits was – to nobody’s shock – a sombre, safe bet to these ears.

Even the BBC, whose uncontroversial reviews are usually the literary version of a head kept well beneath the parapet, compared their ascent as having “about as much horny-handed dues-paying as an ex-Etonian sauntering onto the front bench of the Conservative Party”. For non-Britons, being compared to an “ex-Etonian” (Eton being one of the world’s most elite and prestigious schools) and a front-bench member of the Conservative Party (a political party historically associated with the upper class) is pretty much the equivalent of being called a preppy asshole: money, connections and privilege personified. And news outlets like Drowned in Sound and The Guardian have all commented on their class since, albeit in various ways.

Nobody likes money in rock music, at least not beforehand, and Keane’s emergence proved it beyond doubt. They weren’t the first, and they won’t be the last to be poked around for being posh. Mumford and Sons have been the most recent music A-lister to face accusations of blue blood, and their particular brand of hay bale folk that plays with rock music’s boundaries rings bells.

Rule: You can play around with rock music, just be piss poor when you do.