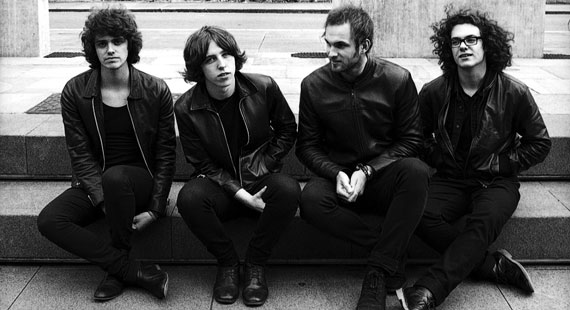 Catfish and The Bottlemen are a classic indie rock set up that have been making waves across the indie circuit in recent years. Supported by the likes of Radio 1 and XFM and featured in most of the British music press, these guys have been given a hearty thumbs up by the British indie establishment, the question is, will everyone else follow suit? We caught up with them at their Southampton Joiners gig during their UK tour to find out.

“Caroline, Caroline!” everyone sings while they wait for their arrival, “she’s the reason for the word bitch!”. Everyone knows the words it seems, and everyone’s excited at the fact that – yes, just like Outkast did for hip-hop – someone somewhere is putting the sing-a-long factor back into music. Because that’s why everyone’s here tonight, to see the band Catfish and The Bottlemen, four indie rocker lads living in North Wales (“the literal meaning of the middle of nowhere, honestly” according to frontman Van) who’ve decided to put melody, wit and aspiration back into a music culture which seems proudly and stubbornly flaccid.

The sing-a-long theme is one that continues throughout the night, with the crowd appearing to have an almost encyclopedic knowledge of the group’s sonic catalogue. The band themselves are a bunch of natural born crowd pleasers. Van, in particular, is a bloke who seems unencumbered by the fact that they’ve sold out a venue (The Joiners, Southampton) that was apparently near empty when they came last, a testament to just how far they’ve come and at such breakneck speed. A jovial mix of compliments, gags and jokes are cracked at regular intervals, all to the crowd’s pleasure. “Honestly, I know it sounds so stupid but we really are grateful for you turning up, it’s a real pleasure to play for you guys!”

“The pleasure’s all ours!” bellows one regular voice. “Ain’t he polite? Whats your name mate?” Van queries the mystery shouter. “James” he says. “Well James mate, this one’s for you” as they play out Homesick, one of 9 singles on a 12-track album due out in September. Yes, that’s nine fucking singles. Like I said, crowd pleasers .

Despite what the audience here might think, Van insists they’re not a “cool” band. “It’s normal shit that everyone’s done before a thousand times. When everybody’s so busy looking outside the box we’re perfectly happy staying right in the centre and doing it as best as we can.” Was it deliberate? “No, it wasn’t conscious at all no. It’s just that we make music that’s straight forward, speaks to you the way you want it to speak to you. We just wanna do proper rock and roll to make a room bounce, that’s all.”

One fact that seems to disprove their notion of “un-cool” is the fact that independent music elder statesmen Steve Lamacq, is in attendance, and plans to follow them around for a few more dates while on a break from his BBC 6 music radio show. A fact that speaks volumes about the importance of this tour for the band. “Just love the band really” he says. And the feeling’s apparently mutual, with the group dedicating a song out of their set to the man who has – in their belief – been such a helpful patron.

When they play their latest single (and most successful euphoria and movement inducing track) ‘Kathleen’, apologies are made for it being played so early. “Yeah, my manager’s gonna have a go at me for this because we’re kind of blowing our load early, so to speak.” Penis humour goes down well for a crowd that in Van’s eyes “aren’t the sort of people to read reviews, the music press or care about what other people think really.” A comment that seems fresh off a post-talent show PR production line but I suspect there could be a grain of truth to this. The people amassed here aren’t (in general) art-school kid lookalikes, identikit indie cindies or vinyl geeks, at least I don’t think they are. More “CATFISH” bracelets seem to be sold than 7-inches and there’s a distinct smell of aftershave in the air that only comes with a crowd approaching something like a more generalised sample of the population.

The fact they seem to pull in more ‘normal’ folk is a good indication of just how successful these guys could be. Their “unfashionable” air (according to non existent hipsters, and The Guardian) basically just means every indie band and their mum is making music which is in complete opposition to this meat and potatoes Noughties-style sound. They remain one of a few indie rock bands not succuming to the psycheldelic orthodoxy. But if rougher, simpler sounds makes you think of rougher, simpler personalities then you’d be dead wrong in the case of these aquatic themed rockers. Van abstains from the swaggering, swearing rockstar model that his music might otherwise suggest. In fact overall he’s a genuinely pleasant character. Polite, modest and unassuming without being painfully earnest or over serious about his craft.

“We’re gonna release the album at the end of the year, come back and head off to the States for a little bit before doing another UK Tour”. “We’ll be kept pretty busy,” he tells me, “the second and third albums are pretty much finished, we’ve got the tracks so in the end we just want people to invest in us a little bit. We’ll try and be as loyal and as honest as we can, that’s all we can do.”

Despite the hope that people follow through with their support Van doesn’t promise the same as what people are liking, “they’re gonna get something better” he insists. “The song that seems to be getting everyone really excited at the moment is Kathleen, but I think thats pants to be honest. I reckon the stuff we’ve got lined up for our album [due out in September] really outstrips that.”

The days of recruiting their friends along to gigs (if those days ever were) has long gone, but quite how that metamorphosis occurs evades Van, he seems beyond perplexed and in slight awe at the group’s meteoric rise. I enquire about Zane Lowe’s endorsement of them (the star DJ named one of their tracks ‘The World’s Hottest Record’) and the confusion only continues, with the ordeal beginning to resemble an old cliche about some blood and a stone.

“I have absolutely no idea how that came about mate. We just did what everyone does and sent it to them [Radio 1]. Steve Lamacq was the first person to ever play us on the radio and it’s because of him that many of the people are here tonight I imagine. He really set the ball rolling.”

“So as for details…” I continue.

“Details? Honestly, I have as little clue as to why I’m sat here as you.”

At the end of the gig Van mingles and chats with the crowd adjacent to the exit, having pictures taken with fans and signing merch. Unphased and enthusiastic he plows through the queue of people waiting their turn to take a picture with him, apparently unfussed that (what looks like) half the venue has taken the opportunity to get close to the man himself. I observe from the bar and begin to think that maybe, just maybe, he might have more of an idea as to why him and his band are so successful than he lets on.