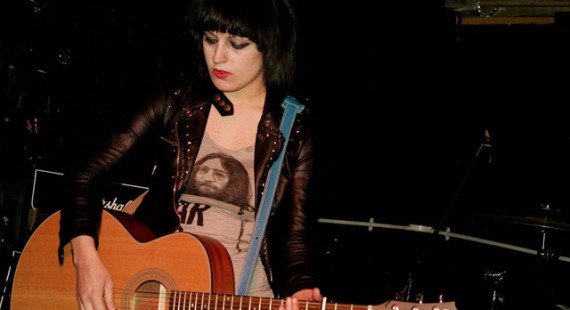 Louise Distras is a Punk who varies slightly from the standard recipe. While like her fellow hellraisers and revolutionaries she has a pretty big bone to pick, hers it seems, is with Punk itself. “I’m no authority but I have noticed that the audiences in Europe and Canada are much younger than in the UK. And in Germany, especially, it feels as though there’s a real strong DIY underground youth movement working towards a better and fairer future, which is something I was never exposed to growing up in Wakefield.”

While Europe, Asia and North American cities like Philadelphia and Toronto (see our article on punk band PUP here) seem ablaze with punk fervor, much of the UK scene seems comparatively lackluster and backward-looking. A haven for the oldies reliving yesteryear but a detriment to young punk fully flourishing. “From what I’ve seen so far, the underground punk rock scene in the UK is alive, kicking and very healthy – mostly if you’re over 40. But from the perspective of a person in their twenties, the alternative scene is beginning to stagnate because it’s the same punk rock dinosaurs singing the same songs and headlining the same festivals every year.”

“Fast forward to five, ten or maybe twenty years from now and it’s easy to see that these bands will no longer exist, so it’s up to the new breed to carry the torch into the future, pass on the message and create the soundtrack for the new disenfranchised generation, because right now there isn’t a soundtrack – or at least one that isn’t afraid to piss off the powers that be. The whole world is on fire right now, and music as a whole is so safe and apathetic. Perhaps part of the reason for that is because people have been institutionalized into channeling their frustrations as Facebook and Twitter statuses instead of painting a picture or writing a song. Expressing ourselves in this way creates a kind of fake satisfaction that promotes complacency and curbs counter-culture”. “Punk” she says, “is not just another music genre, it’s a way of life.”

It’s a message that’s consistent with her debut album, Dreams from the Factory Floor. Described on her website as “twelve clenched fists full of fury aimed squarely at consumer society, sexual discrimination, and the ‘chosen few’ who run society in their own interests” — Distras is a throbbing red exception in an age of musical apathy. Like the Punks of old she too has a soft spot for the art of the powerful statement, choosing to release her call-to-arms single “Hand You Hold” on International Women’s Day. Suitable symbolism for a woman who told The Guardian: “Punk to me means living by your own politics and doing things on your own terms… The term has been used very liberally, maybe too much, but I think it all boils down to that one universal idea.”

Her politics on her terms are – without insulting – the predictable concerns of many lefty-revolutionary types: working class unity, corrupt government, a self-serving elite and a fair wage for a fair day’s work. Only her primary crusade, the one for which she’s maintained a special section of her soul, is a kind of punk-style hardcore feminism. It’s a very current reappropriation of the genre’s anger to some very 21st century issues like gay and transgender rights and the continuing plight of women in our apparently sexism-free liberal western democracy. She’s a fighter, staring down society’s gender imbalances like a lioness sizes up the gazelle, ready to eat up it’s sexist hypocrisy and blow unadulterated political punk anthems out the other end.

“Fortunately there are a lot of good people putting a lot of positive energy into the punk scene and drawing attention to women and LGBT issues, but punk rock is still a very male dominated environment and there’s a long way to go before it’s an even playing field and it would be naive and complacent to believe otherwise.”

“Punk bands and promoters use sexist images of women on their posters and merchandising, 9 out of 10 shows I play, I’m the only woman on the lineup, I’ve been told if I ever want to be taken seriously in music, I need to lose weight and I’ve also been exposed to other comments and criticisms about the way I look. I’ve had beer and insults thrown at me, I’ve been grabbed and touched in intimate places by male fans and promoters at shows. Ignored and denied soundchecks because I’m “just a little girl with an acoustic”. I’ve been accused of not writing my own songs and accused of not being in control of my own career and been treated with the assumption that this is the case. I’ve been threatened with being stabbed and raped. One time a guy came up to the stage and put his face between my legs whilst I was performing in an anarchist squat. More often than not I see women and young girls standing at the back of the room during shows because it’s not worth the risk of being grabbed or harassed by some drunk guy at the front and most of the dialogue I hear with regards to women punk rock pioneers revolves around talking all about the way women look, and nothing about what any of those women had to say. There have been so many times I’ve overheard guys in bands making derogatory comments about women in the audience and women musicians; comparing their bodies, ageist comments, and using language tantamount to slut shaming.

“Reducing someone down to their body parts and the way they look is objectification, and objectification is objectification whether it’s in a mainstream or a punk rock context. There are too many examples of casual sexist behavior within punk rock to list and I am not the only woman out there that lives and breathes these kind of experiences every single day but what’s worse is that when you speak out against it you’re ridiculed, as if you’re uptight because you consider it a problem but there’s no way I’m going to not speak out about it because it’s those kind of backward attitudes that have led to women being under represented in music in the first place, and now more than ever punk rock needs more positive women and LGBT role models.”

“For example, using sexist and one dimensional images on posters and merchandising that portray women as playthings whose purpose is to serve men (in an already male dominated environment) is irresponsible marketing that’s sending out mixed messages about gender roles to young audiences, which in turn has a knock on effect in how young women view themselves and the way young men view young women around them.”

Having a cause is all well and good, but is punk sometimes just a game of dress up where teenagers and 1977 nostalgia geeks thrash around for fun? “Definitely” according to Louise, but she seems unphased. “Who wouldn’t want to dress like a punk? Punk fashion is the coolest, but it’s more than a fashion – it’s a spirit and energy that comes from within and that’s something you can’t buy from a shelf in Hot Topic. I’m no authority on who or what is punk rock and to consider myself so would be extremely conceited. But one thing I do know is that in this hateful digital wasteland of social media and X Factor culture, there are kids out there who are pissed off with the world around them, and they’re using their guitars or their voices instead of Facebook statuses to say something about their lives and have fun at the same time.”

“That’s fucking cool with me, because as long as that’s happening punk rock will never die, and it sure beats the hell out of watching X Factor.”